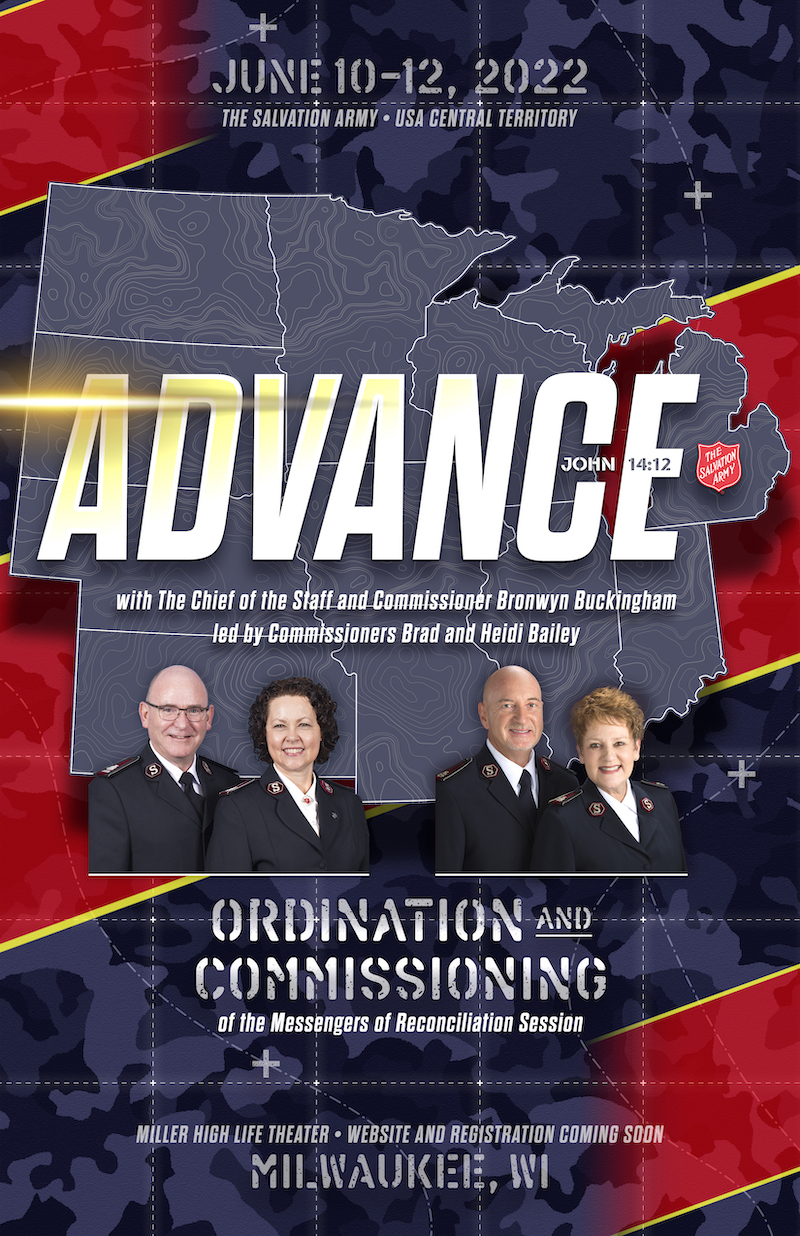 /ədˈvans/
verb
verb: advance;
move forward in a purposeful way.
make or cause to make progress.

The Salvation Army was raised up by God to ADVANCE His Kingdom on earth as it is in heaven. God hasn’t only raised us up, but He has empowered us. In fact, Jesus Himself said, before He went to be with the Father: “whoever believes in me will do the works I have been doing, and they will do even greater things than these…John 14:12

Commissioning weekend 2022 will be the first time the territory has come together in three years.

We have trusted God in all our planning which is designed to fire us up, in the power of the Holy Spirit, to advance God’s mission like never before.

Soldiers, Adherents, Staff Teams, Officers, and anyone else who wants to join our movement, will have the opportunity to connect in a fresh and powerful way with our mission:

To Preach the Gospel of Jesus Christ and Meet Human Needs in His Name without Discrimination.

This year we have the distinct privilege of hosting Commissioners Lyndon and Bronwyn Buckingham (The Chief of the Staff and World Secretary for Spiritual Life Development) from London, England. They, along with Salvationists from across the territory, will help us to focus on our three-fold, global commitment: To save souls, to grow saints and to serve suffering humanity.

Salvationists and friends from Minot, ND to Evansville, IN (and everywhere in between) will hear great music, Spirit-led preaching and transformational testimonies from across the territory.

On Sunday we will witness the sacred Ordination and Commissioning of the Messengers of Reconciliation Session as the Cadets are ordained as ministers and commissioned to do the work of The Salvation Army with the new rank of Lieutenant. The weekend will conclude as we all witness the Lieutenants being given their first appointment and sent out to be Officers in His great Army.

Commissioners Bronwyn and Lyndon Buckingham, originally from the New Zealand, Fiji, Tonga and Samoa Territory, are passionate representatives of The Salvation Army. They have served as officers since they were commissioned in 1990 as members of the Ambassadors for Christ Session. Commissioner Lyndon assumed his current appointment as The Chief of the Staff on 3 August 2018 and Commissioner Bronwyn as the World Secretary for Spiritual Life Development on 1 January 2021, having previously served as the World Secretary for Women’s Ministries.

Over the years of their officership they have served in corps appointments in New Zealand and Canada, as Territorial Youth and Candidates Secretaries, Divisional Leaders and Territorial Programme Secretaries.

Bronwyn and Lyndon are parents to Daniel and Emma, and their lovely daughter-in-law, Juanita. Daniel and Juanita are Corps Officers and Emma holds a Social Ministry appointment, all in New Zealand. They are proud grandparents to Israel and Tobias. They are continually blessed, encouraged and challenged by the desire of their adult children to serve God in their generation.

In each of their appointments the Buckinghams have displayed a desire to see the great news of the gospel shared.

Bronwyn is inspired by the belief that God has a new truth to reveal to her daily and compelled by the promise that He is continuing to grow and stretch her (Philippians 1:6). She desires to be the woman God is calling her to be and is passionate to be part of an Army where the next generation will choose to embrace their leadership calling.

Lyndon is passionate about finding ways for The Salvation Army to be more effective in fulfilling its mission. He is determined to be faithful to the covenants he has made, and is motivated by verses from Paul’s letter to the Colossians: ‘Whatever you do, work at it with all your heart, as working for the Lord, not for men’ (Colossians 3:23)

Both are intent on enjoying life, endeavouring to stay fit by walking and jogging. They enjoy reading, watching good movies and are avid supporters of New Zealand’s ‘All Blacks’ rugby team!

+ By Invitation Only | * Delegate Credential/Ticket | **Available with Pre-Registration Only
Spanish, Laotian and Korean Translations will be provided for General Sessions
Transmitters will be distributed at the Miller High Life Theatre in the Box Office Lobby
As of April 1, 2022 - Schedule is Subject to Change

Parking Fees and Wisconsin State Taxes are Subject to Change